I’m upgrading the speakers on my Star Trek Next Generation game. After doing some Internet research, I came across a great site that has a lot of info about WPC Bally and Williams games. Here’s the link.

I’m not going to bother repeating anything that wasn’t already covered on Tony’s site as it pretty much covers everything, but I’m going with a larger sub than was mentioned there.

I’ve upgraded the sound on other games before, but this one I’m putting a 12″ subwoofer into the cabinet. From past audiophile projects, I just happen to have two 12″ subwoofers sitting around. A Sony 12 from a powered home theater system, and a Realistic (Radio Shack) that has a dual voice coil. Really, a 12″ sub is going to be a huge improvement over the wide range 6″ speaker that’s in there.

My goal is to not cut a huge 12″ hole in the bottom of the cabinet. I’ve built a few speaker enclosures before, and I know you can use a large subwoofer with a small hole and it will sound just fine. Plus, should I want to put the game back to stock at anytime, that option is available. The idea here is to build an adapter plate for the speaker to sit on.

I went to Home Depot and bought a 24″x48″ 1/2″ thick MDF panel for $7.50. That enough to do 3 adapter plates. I cut out a 14″ x14″ square, then cut an 8 1/8″ square out of that so it fits around the stock speaker mounting board. Once it is mounted, the new subwoofer will fit right on top. The only other thing I had to do was to cut off the existing speaker screws and staple the metal grille back in place. Then mount the subwoofer. The new speaker clears the playfield just fine when it is moved for servicing. Other games will vary and so will other speakers depending on the mounting depth of the speaker replacement. (see pics below).

Testing revealed a better sounding bass. But, it’s not loud enough. According to the website reference above, an L-Pad is the best thing to mount to lower the volume for the back box speakers. Which will then raise the loudness of the subwoofer once the overall volume is turned up. I just got to order one. The best place I’ve found to order speakers and speaker parts is www.partsexpress.com.

I’ll post more test results once I get the L-Pad in and installed it.

I’ve finished upgrading the speakers on Star Trek NG, Indinapolis 500, and Dr Who. For all of them, the right back box speaker hole was cut larger for the larger speaker.

For Dr Who, I used Roadmaster VR3 5.25″ speakers that can be bought at Wal-Mart. I had these already so I used those. They cost about $20. Resistors and a crossover capacitor was used to lower the volume and prevent low frequencies from getting to them. A 6.5″ Techniques sub was added to the bottom cabinet with a low pass crossover. I couldn’t fit any bigger sub woofer in there because my playfield has the old style mount and the Time Expander barely clears the 6.5″ sub.

STTNG got a pair of black Lanzar MX52. Cost is $16.29 at Amazon. These were chosen because of the color. They sound exactly the same as the Sony Xplodes ($39) I returned to Wal-Mart yesterday, but they are quieter (less efficient.) This is a bonus in this application since the sub is now louder. No L-PAD needed. A Sony 12″ sub is in the bottom. It really rumbles! I tried a 6.5″ and I could barely hear it in comparison. I think the larger cabinet of this game might have something to do with it.

Indianpolis 500 got a pair red Pyle PLRL52. Cost is $13.75 at Amazon. These were also chosen for the color. These plus the 6.5″ Techniques sub in the bottom sound perfectly balanced without any L-Pad or resistors. No crossovers are needed in any DCS game, so install is easy. All of the 6.5″ Techniques subwoofers I used came from a home theater sub that had 4 in the case. I parted it out to use for my pinball machines. The whole box was bought for about $20 at a thrift store.

These upgrades are well worth the effort as the stock sound is really lacking on all of them. Highly recommended!

For future reference, here’s the specs on Dr Who since these pre DCS games are a bit more tricky to sort out.

The bottom speaker is a Techniques 6.5″ 4 ohm with a low crossover of unknown value. I’m guessing, but it’s probably blocking everything above 200hz. It came out of a home theater sub woofer box.

In the back box, I used two 5w 22ohm resisters in parallel with a 100v 100uf capacitor. The resistors are used to lower the overall volume of the backbox speakers and making the sub woofer louder at the same time. The capacitor is used to block low frequencies from getting to the speakers and causing them to pop and crackle at loud volume (very high watt/expensive speakers probably wouldn’t pop or crackle.) These two speakers in the back box are wired in series.

This is a great site for determining what spare capacitors in your tool box will give what cut off frequencies for your speakers.
http://www.carstereo.com/help/Articles.cfm?id=1

I modified the wiring coming out of the sound card. Two wires are going to the back box speakers and the other are going to the bottom speaker. I forget which is which, but I remember just adding two. It’s a mono output so it doesn’t matter which set of wires go to where, but two wires go to the back box, and the other two go to the bottom speaker. See the pic below.

Deciding which value of resistors is basically found with trial an error and sound preference. Each speaker has different efficiency values so what works with one setup may be a little different on another. An L-Pad makes it easier for adjustment but is more complicated for installation. Radio Shack used to be a good place to get ceramic resistors and they are cheap (I haven’t been to one in awhile so I don’t know if they sell such resistors any more.) I was essentially using spare parts I’ve collected over the years. 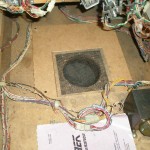 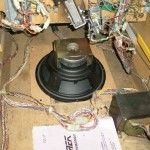 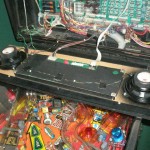 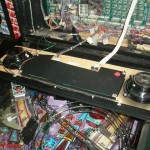 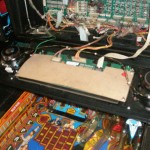 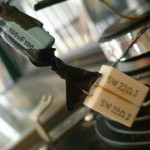 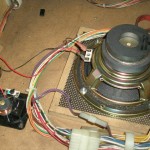 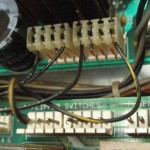