I finished installing Gorgar’s refinished legs today. They were painted 72 hours ago using Rustoleum’s truck bed coating. His old legs were very rusty and I chose to redo them instead of replacing them. Doing this not only saves about $40, but gives me old style black legs and not chrome or silver ones. I think black matches the game better.

Each leg had to be given the wire wheel treatment to remove the rust. A sand blaster would’ve been a better choice, but I don’t have one of those so I used the next best thing. After that, Rustoleum rust reformer was applied to seal any rust missed on the backside of the legs (the wire wheel can’t access all areas.) Two coats of truck bed coating was applied and let dry for 72 hours. It took two cans of coating and one can of rust reformer to do four legs.

The end result are some very nice looking legs. So if you got the time and you don’t mind a little work, it’s worth the effort.

Note: Besides Rustoleum truck bed coating, I’ve also used Duplicolor’s version of the product. Duplicolor goes on more like an undercoating and I’ve had it completely flake off pinball legs after a couple of months. At the same time, I’ve painted a motorcycle gas tank and fenders with the Duplicolor type with no problems at all (in fact, it’s hard as a rock.) So your mileage may vary. From this point on, when painting legs I think I’ll stick with Rustoleum (bought at Autozone.) 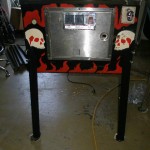 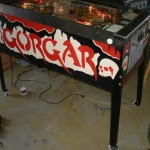 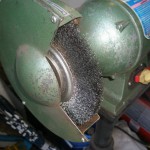 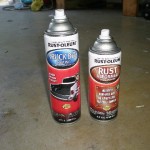 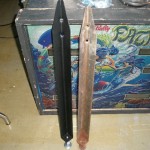 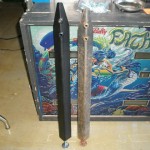