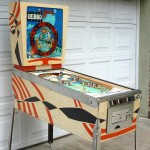 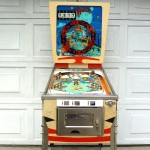 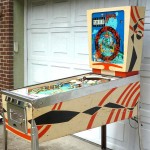 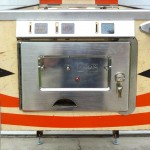 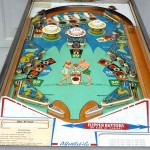 I just finished working on this 1970 Aquarius, a beautiful wedge head from Gottlieb. It came in non-working and wouldn’t start a game. After some fuse testing and relay checking, I found the scoring motor in the bottom cabinet was sticking. After some gentle persuasion and a tiny bit of silicone lube on the mechanisms spindles, it was moving again and the game came back to life. But, I wasn’t finished yet.

The game started and ended a game, but no replays were being rewarded when successfully hitting all the targets during game play. I was working without a schematic, so I had to do a little investigating. What I found was the switch on the credit reel that was supposed to indicate 15 (full) was open all the time. If it is full, the game thinks there’s no need to award any more and that means no specials. While I was at it, I jumpered the two switched and indicate 0 credits for free play. That means no more adding quarters at the coin door. During play testing I noticed another problem. The game is supposed to alternate which target that special is awarded on, and it seems a little flakey. In the back box there is what is normally called a player unit (on 2 or 4 player games). On this game, this similar mechanism controls where that special indicator is located. This is one was just plain dirty. The previous owner had probably cleaned it pretty good, but then greased it up afterwards. These units don’t need grease. Grease just attracts dirt and makes a bigger mess in the long run. Just run it clean and dry. After I disassembled, cleaned and reassembled it, everything was working properly. After a final check of all the wiring and relays, I found one of the knocker coil wires was about to fall off and it was soldered back on. I also had to replaced 3 light bulbs. As a final step, I cleaned the playfield rubber and waxed the playfield since they were a little dirty. I put on about 15 games to make sure everything was working as it should. And…it was…done.