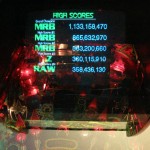 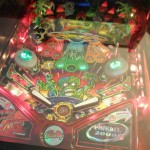 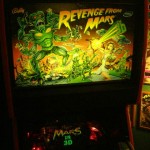 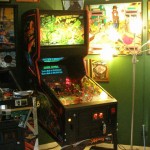 Yep, the latest addition to the game room is a Revenge from Mars. Pretty exciting and I gotta say, this game is a lot of run to play. It needs a little TLC and I will give it a full dose. I had to give a pretty good rub down with the wax and Novus 2 on the ramps. The ball trough was pretty dirty and looks great now. I took the apron off and found a nice layer of black dirt and replaced a bad flasher bulb that didn’t show up in the diagnostics.

The pinballs were pretty grubby, too. I put new ones in already. I also found that both flipper assemblies were loose and almost every solenoid bracket was loose, too. I also adjusted the pop bumpers. The CPU fan is very loud and I’m replacing this today. I also added some new leg levelers and moved the sling shot spot lights to point at the rubber aliens and not down at the playfield like they were setup

The previous owner (who only had it a month) had bought it from a dealer in Florida, and jeez, don’t dealers go though these things before they sell them for the big bucks? No matter, really. I’ll get this thing in ship shape in no time.

The software is v1.2 and I’m going to upgrade it to v1.5 as I’d really like to have the the ball saver and opening the orbit loops that I’ve read about. Should be fun!