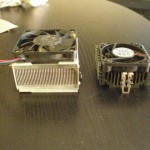 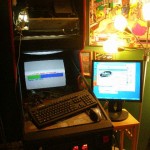 I upgraded the software to v1.5 today. I thought it was convenient that I have a MAME cabinet running Windows 2000 sitting right next to it. I went to CompUSA today and bought a null modem cable and hooked them up. I couldn’t get Windows 2000 to connect, though. It just wouldn’t work. I abandoned that system and hooked up an eMachine with Windows XP and it worked.

v1.5 is better with added pop bumper scoring, ball saver and the outer orbit opened up in some modes. I also set everything to extra hard and removed any extra balls given from scoring, the game was just too easy.

The last thing I did was change the CPU fan. I had one lying around from an Athlon XP CPU and it fit even if it is over sized. The fan is so fast it’s kind of loud. I checked the temp with an infrared temp gun and it’s 86 degrees after running 30 minutes during play. I bought an in-line fan controller at CompUSA also so I can turn it down a hair and make it quieter. It’s overkill right now.

I also found the game has 1800 plays on it. Kinda low? Could it have been reset?