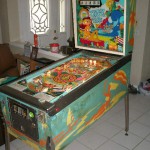 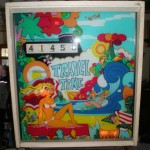 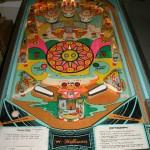 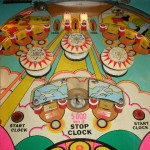 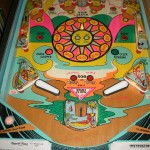 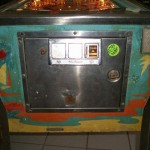 I found a deal on a 1973 Williams Travel Time and picked it up yesterday. It was from a typical Craigslist ad where the seller wasn’t quite sure what he was selling. He told me over the phone that he got the game as trade for some work and it just quit working and he didn’t know how to fix it. So, as that could be anything and the game could be a complete basket case, I took a chance and went to his house to check it out. This game really wasn’t in that bad of condition. The cabinet could use a repaint, but the playfield is just a little dirty. There is a little wear here and there, but for a 38 year old game, that’s expected. It has 74, 531 plays on it! It looks real good for that much play. I saw the Gottlieb flippers on it right away. Those will have to be changed out.

The backglass is starting to flake in the center. That will get a shot of clear coat to prevent further flaking. Unfortunately, there is a crack in the glass in the lower right corner.

Now, after looking at the game I could already see why it wouldn’t start a game. It was out of credits! Yep. I had to keep that revelation to myself and make a deal. And again, as I saw this coming with a typical Craigslist sale, he was going to raise the price after 20 calls within the first hour of his ad. Although I do suspect the fact that the ad was so poorly written with no game name and a very blurry picture had something to do with all those phone calls.

I put his ad price in cash on the glass and said “here you go”. He had to leave the room and check with his wife and came back with a 50% increase on the price. Surprise, surprise. I didn’t even bring that much money. All I had was 11% more. After another check with the wife in the other room and some whining from me about it all, he accepted the deal.

We had to drill out the back box lock to remove the back box for transport. The game was moved to his house assembled with legs and all! No doubt this is how the backglass was cracked.

When I got it home and setup, I was able to start a game right away by adding a few credits to it, of course! But, the game isn’t all perfect. The are no working chimes. The center one needs a new coil and the whole unit needs to be rebuilt. Other than that, a few adjustments here and there plus some typical cleaning and this game will be up and running. A new power cord is needed, too.

Not a bad haul with a few hiccups as expected. The game is pretty interesting due to it’s timed play and offers and nice change up from typical modern pins.

And whoever you are from Fort Myers who calls people selling pinball machines on Craigslist telling them they are simple to fix and they are priced too low should keep your damn comments to yourself. Until you actually SEE the game in question, you have no business discussing a game you aren’t going to buy. All you are doing is hurting this hobby and making it difficult for collectors to purchase fairly priced games.

2 thoughts on “Picked up a Travel Time yesterday”