A Bride of Pinbot, The Machine, was brought to me that wouldn’t boot up. She needed some repair for sure. The first thing to do is to check the voltages. I discovered the 5 volt was missing. I found the bridge rectifier, capacitor and regulator for this circuit on the driver board were all shorted out. They were all replaced and that got it back up. I reflowed all the solder on the header pins. Some of the original solder joints were cracked and this has become a standard procedure for a reliable game.

This got the game booting up and playable with all the lights back on. One startling issue that arose was the volume would go to full blast without warning while playing a game. This was caused by a bad capacitor on the sound board.  C18 was replaced and the problem was solved.

The only last few issues I found was the original flipper springs were both broken. I replaced them with newer WPC springs that work off the pawl and allow for better flipper action. I do that to all System 9-11 and WPC 89 games. All of the flipper switches and EOS switches were cleaned. Also, the middle pop bumper was out of adjustment with a dirty switch. Those were cleaned and adjusted.

That’s it. This bride is ready for action again. 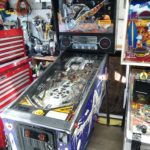 The Machine : Bride of Pinbot 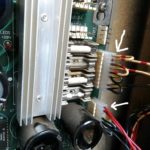 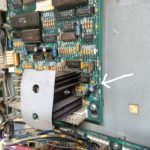 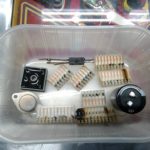 All the old parts that were replaced. 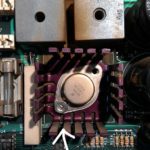 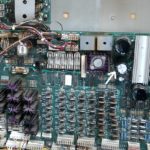