A client dropped off this reproduction Funhouse playfield from High Class Pinballs in Germany that needed some help. It’s a very nice reproduction, but had a few flaws. Mainly a couple of bumps in the clear coat right between the sling shots. Probably the worst place to have any defects because it’s so visible. The playfield also had some bizarre side effect from being stored with saran warp. Some kind of chemical reaction took place that caused a dulling of the clear coat shine in almost a camouflage pattern.

The only way to fix these problems was to wet block sand it with 2000 grit sand paper, followed with 3000 grit, then rubbing compound with an orbital buffer to bring back the shine. After that was completed, a pipe cleaner and tooth brush cleaning was required to remove left over white powdered clear coat and rubbing compound in all the holes. When it was all finished, we now have an EXTREMELY nice playfield to install into the game that will last a long time. It has already been picked up and the client was very happy.

See the photos below. It looks like my camera struggled a little bit to keep the entire playfield in focus on an overcast and cloudy day. I tried to show some reflections of the surrounding trees. Some of the longer shots look a little blurry on the far end. 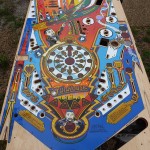 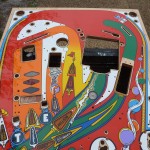 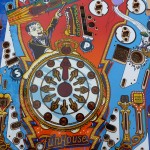 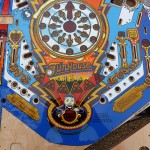 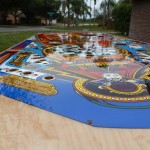 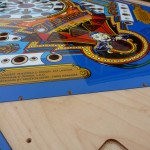 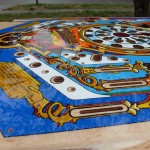 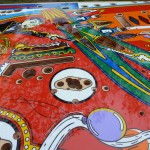