Williams Sorcerer is an awesome game. But, I’ve never liked the pop bumper caps. This particular Sorcerer has a full LED conversion with an LED OCD board so I thought some LED pop bumpers would make a great upgrade and match the rest of the game.

Here I’ve added some Stern style jeweled pop bumper caps with LED Pop Bumper Rings from Comet Pinball. I simply hot glued the rings in place to the pop bumper cap. The only issue that I had was the center lamp was sitting too high and showing a red dot since it was so close to the cap.

I cut those lamps off and soldered in some stalk type SMD led lamps without the base. I then hard wired them into pop bumper lighting after removing the existing sockets. This allows adjustment of the center light. If they are positioned near the rear of the pop bumper body, they appear centered from a player’s position. Also, since they are lower within the pop bumper body the illumination of the cap looks much better than a single red dot as it was previously.

The end result looks great. These caps really fit the theme well. You can imagine they are a magical source of the Sorcerer’s power. I found it difficult to take accurate photos of the new pop bumper LED rings. The bright light they emit causes havoc on my camera lens. They definitely look better in person, but the photos below will give you an idea of the finished project. 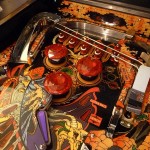 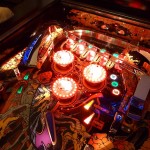 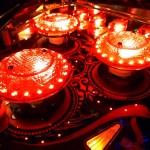 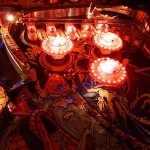 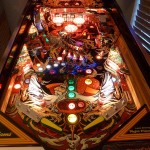 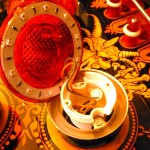